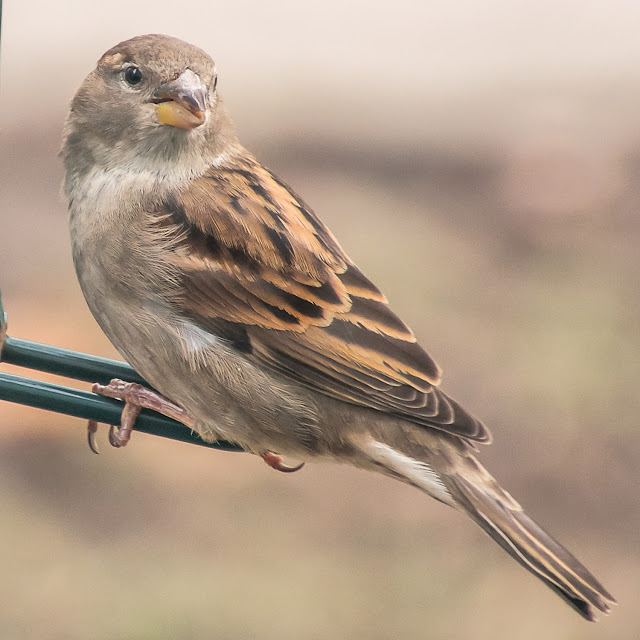 Again, I have been MIA for several weeks. I notice that when I click over to the blogger page, I continually lose followers. I don't blame them, why follow someone when there is nothing to follow. I do the same,

And now that I am back on these pages I am struggling with what to write. When I was writing daily it was easy to write about book I was reading at the moment, the TV show that caught my eye, or a movie that resonated with me.  And my intention has always been to use this space as a way of keeping an illustrative diary of sorts of my daily life. Well, if anyone wanted to catch up on my life they would think I was dead, or just barely alive. That is not the case, yet.

The pic of the bird above is pretty indicative of what life is right now.....brown and boring. We have no pretty snow, altho I am glad we didn't get the major dump that the east received from Storm Jacob. By the way, when did "they" start naming snowstorms?  And it's a long, long time until Spring arrives in the midwest.  The only color I could find was some dried up berries still hanging from a tree across the street. 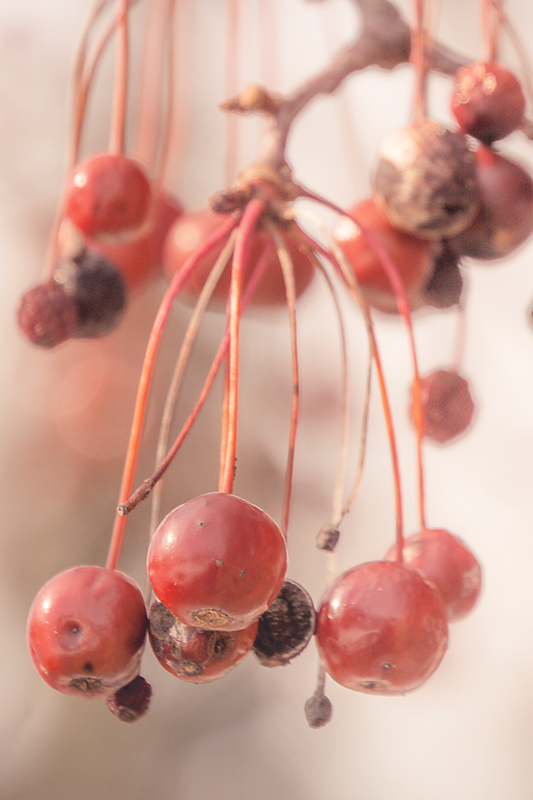 I have seen some outstanding movies lately. I try to and see the nominated ones, so I can root for my best loved come OSCAR night.  My daughter always has a gathering with Chinese food (?) from their favorite take-out. We each pitch in a couple of bucks and then pick our favs to win.  So far I have seen "The Big Short" terrific movie but I have to admit all that financial jargon was a little confusing. "Room" you must see this to witness brilliant acting and the eyelashes of the young boy who spends the first 5 years of his life in the "room".  And finally "Spotlight" another terrific movie about a group of investigative reporters that uncovered the allegations of abuse in the Catholic Church and it's cover-up in Boston. All three of these movies are brilliant. Now onto "Brooklyn", "Carol" and "The Danish Girl". Hesitant about seeing "Revenant" because of the gruesome scenes, but I have a feeling Leo is gonna win the Big O this year for his performance.  I looked up the definition of revenant and the dictionary defines it as "a person who returns" or "as a person who returns as a spirit after death" for your inquiring minds.

OK confession time.  It has been years and I do mean years since I read "To Kill a Mockingbird" but I certainly remember the gist of the story.  Our bookclub choose "Go Set a Watchman" also by the famous Harper Lee who wrote TKAM. I was reluctant to read it, but having memory issues over the original TKAM and knowing Watchman was supposedly her first draft but her editor convinced her to change the whole time-line with Scout being a child instead of a 20 something young woman, I began to read. And I must admit that if I hadn't heard all the brew-ha-ha over this new release I would have thought it was the perfect follow-up to TKAM. And yes, I liked it. It was a short book compared to today's new releases (less than 300 pages) and I read it in 2 days time. Then I read "The Edge of Lost", don't bother. I kept waiting for it to get better but it didn't. Now I am reading Karen Slaughter's "Pretty Girls" a psychological thriller about a family torn apart by tragic occurrences. Supposed to be disturbing, I like disturbing every now and again. I read the first few chapters last night and it roped me in immediately.

See what happens when I don't blog often....I tend to ramble on.  I have been noticing Elvis Presley showing up alot on Facebook recently, just checked and "if" he was still alive he would have been 81 on January 8th. I remember the day he died (Aug 16, 1977) but I certainly don't remember the day he was born. And also January 28th was the 30th anniversary of the space shuttle, Challenger disaster. I remember that too.  I was standing in line at a Sear's store in the Washington DC area buying a small serve coffee pot when it was broadcast throughout the store on every TV operating monitor. Sometimes it's hard to remember last week, but somehow we remember where we were during those significant moments

I have rambled long enough. I hope the winter is kind to you, stay healthy, stay connected.

There are perhaps no days of our childhood we lived so fully as those we spent with a favorite book.

–Marcel Proust
Until next time.....