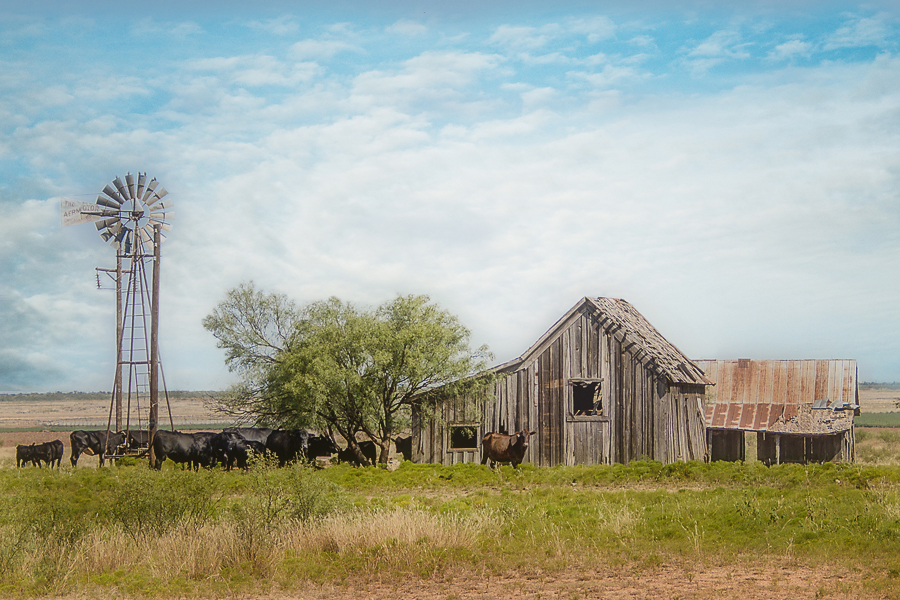 Traveling thru Texas on the way to Santa Fe, NM

A trip to Colorado to photograph the aspens in the Fall led by my friend and mentor Lou Nettlehorst, good golly yes, I'm in. That plan began much earlier this year with my blogging/photographer buddy, Jeanne Stone. We have made 2 trips together, one to Charleston, SC and another to photograph the Hill Country in Texas during bluebonnet season. We are compatible companions, even with my snoring and enjoy the beauty of the outdoors and nature. We get it when we take 30 minutes to photograph a wildflower, unlike those who do not see how we photographer's see. You guys out there know what I'm talking about.  Jeanne has breathing issues in high altitudes and her doctor advised her to drive to Colorado instead of flying to help her lungs gradually get used to the difference. OK, instead of flying to Colorado as originally planned I flew to Dallas (where Jeanne lives). A wee bit off track but not only did we plan on joining Lou in Gunnison, Colorado on Saturday, Sept 16th we decided to extend our trip by driving from Dallas to Santa Fe, NM... 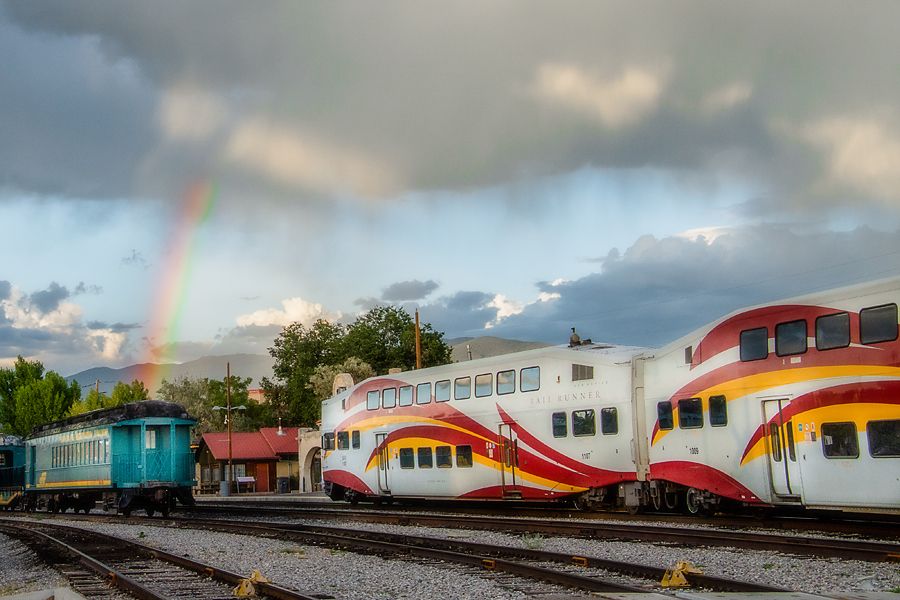 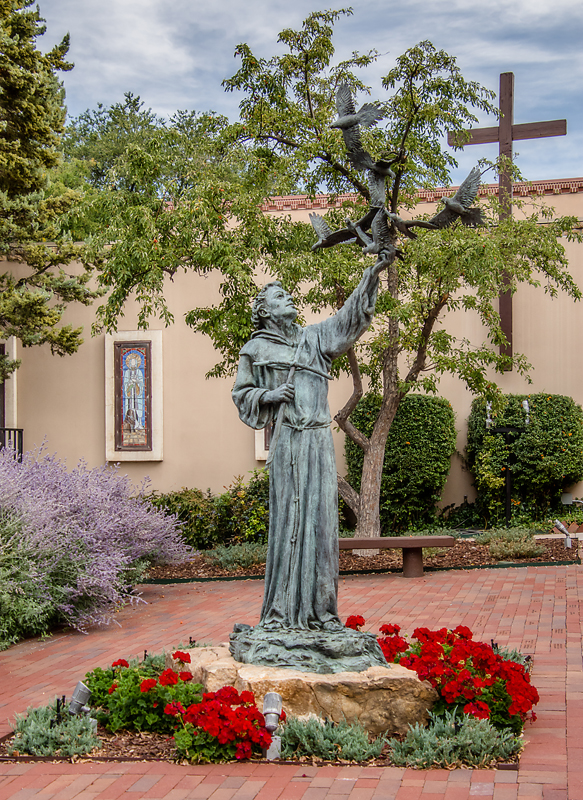 staying 2 nights in Santa Fe (which was not nearly enough), then drive to Ghost Ranch near Abiquiu, New Mexico, the land of Georgia O'Keefe spending one night there (again not nearly enough) and then on to Gunnison, CO to meetup with our group for dinner and a get-together before outings began early the next morning. And what I mean by early is setting my alarm for 3:30 AM, holy mackerel who gets up at 3:30 except maybe to go pee. Lou has a habit of choosing places that are a bit of a drive for those early morning sessions, but it's all worth it for the end results.

The night we arrived in Santa Fe we ate at a restaurant known for their tasty margaritas. Now I'm a frozen fruity margarita fan so that was a choice I decidedly agreed upon. Jeanne could only take a few sips, while I enjoyed every last drop and didn't feel a thing. While in Santa Fe, we wandered thru the streets, popping into churches to admire their beauty, touring the Georgia O'Keefe Museum and stopping at the rail station where the rail runner still had regular scheduled departures. Notice the rainbow in the scene....I took this as a positive sign that our trip would be filled with good times. It was until the phone call from my daughter came on Sunday evening. 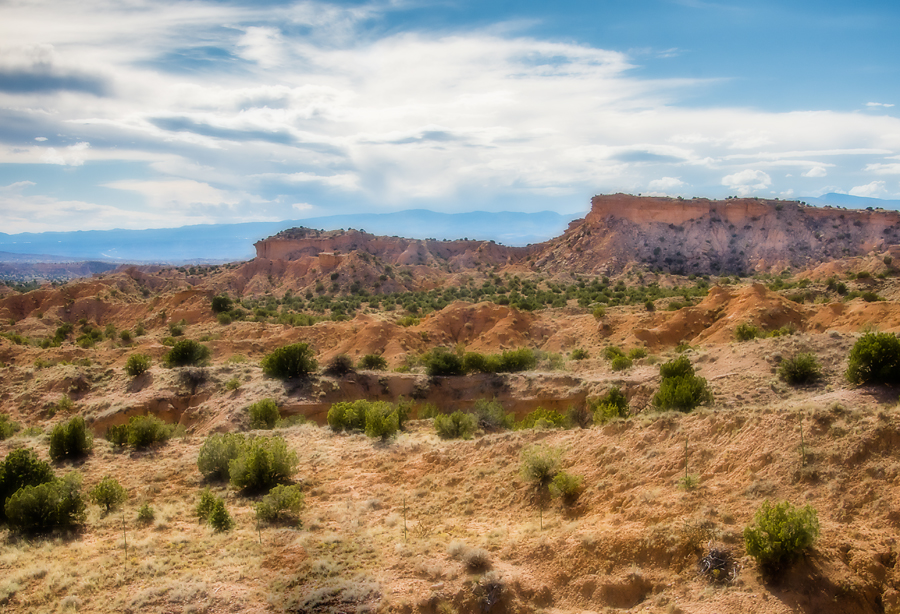 After leaving Santa Fe we headed to Ghost Ranch, the iconic place where Georgia O'Keefe created some of her finest work. The ranch itself is over 22,000 acres, but to my surprise, Georgia only owned about 7 acres of this grand space. Apparently she tried with earnest to buy the whole 22,000 acres, but in the end the owner, Arthur Pack left everything, except the 7 acres to the Presbyterian Church. It now resides as a retreat and education center with over 300 classes taught there each year. In fact, our humble abode (and they are rather humble, with no AC and concrete floors) was right next to a large group of oil paint artists that were in the midst of their last creation before packing up and leaving the next day. What a panorama for a subject. 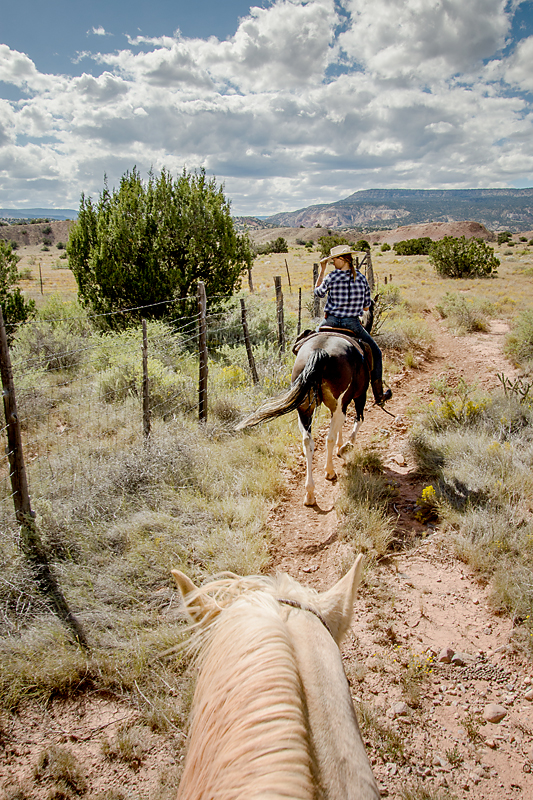 Yeah, that's me on the back of the horse, not the good looking cowgirl in front leading, me on the back of blonde horse, clinging (not really) to the reins and trying desperately to take photos with my big girl camera as we rode around Ghost Ranch for 1 1/2 hours. Please don't inquire as to my butt condition after that ride. Let's just say, I didn't fall off and the scenery was amazing. 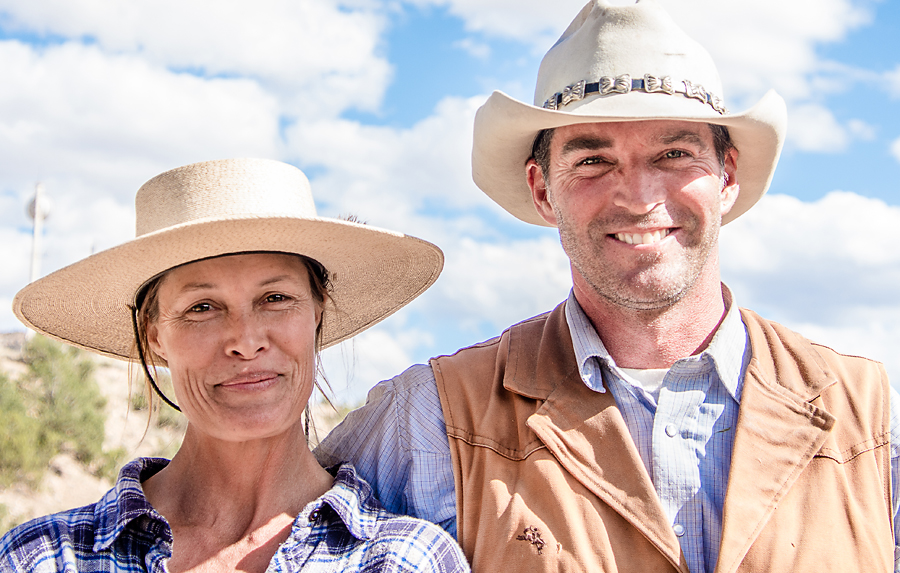 Our two wranglers, very kind to us oldies....

That evening we wandered down to the entrance to Ghost Ranch to capture the sunset. You can see from the wagon that the golden hour was indeed golden.  Wonder if riding in the wagon would be any more comfortable than the back of the horse...probably not. And that sweet little cabin is the one (so I have been told) that was featured in the movie, "City Slickers" with Billy Crystal.  In the visitors center there are a whole slew of movie posters featuring movies that were filmed at Ghost Ranch. 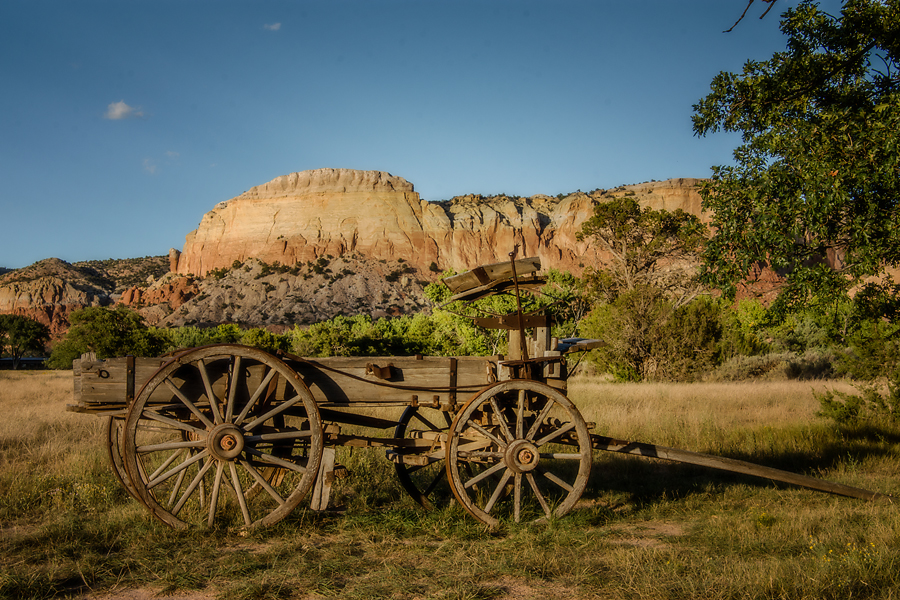 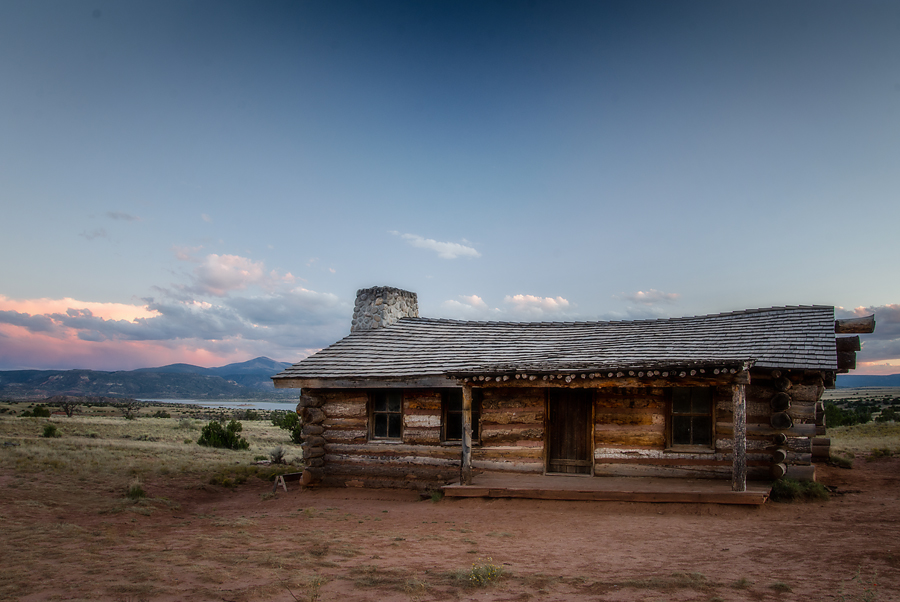 Next stop (except for a few minor pull off the road I need to get that shot episodes) Gunnison, CO.

PS - Thank you all for leaving such kind comments on my last post. I so appreciate your prayers and love that you have expressed. From the bottom of my heart, thank you!!