An Added Dose of Self Pity 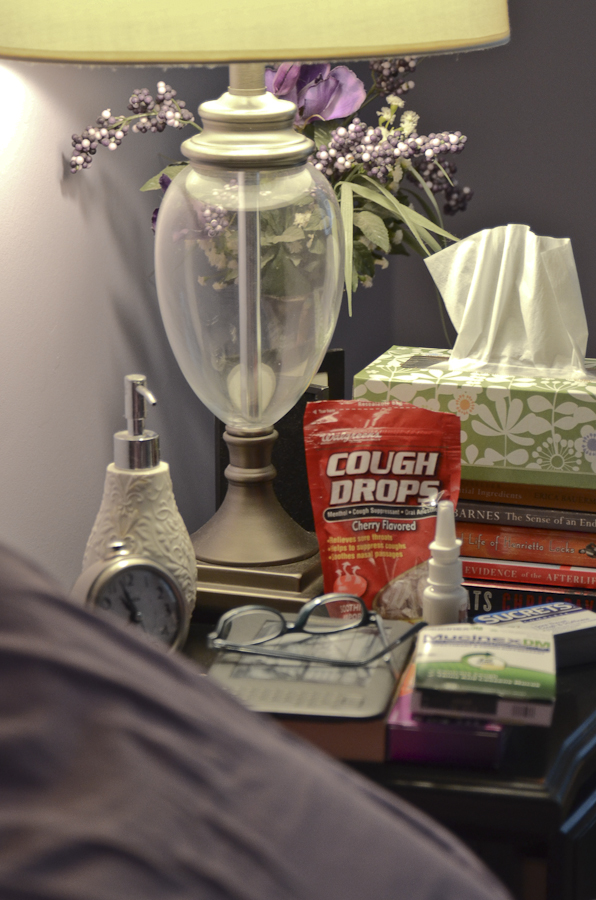 I feel like I have risen from the dead...well, not quite.  I think there was only one that ever did that. But after feeling a little crappy last week pouring on the Vitamin C and Ibuprofen and liquids and feeling pretty darn confident that I would be making the trip to Indianapolis for The Women of Faith Conference, my feeling crappy turned into major sick.  Coughing, sneezing, eyes watering, nose running, sore throat achy feeling has been my norm since last Wednesday.  And it's not pretty.
Needless to say I did not make the trip to Indy, #1 couldn't imagine driving for 3 1/2 hours #2 the ladies driving with me would definitely not want me as a traveling companion...so no "Women of Faith" for me this year.  However I did catch up on the Stephen King's "Under the Dome" series that I had taped...hmm, not exactly the same, one gives your soul some spiritual uplifting, the other, well the other did nothing but give me a little entertainment while lying in bed.  I have also been trying to read, but reading after awhile becomes tedious to my eyes, did you ever have that feeling that there are little specks of sand in your eyes that just won't go away?  So reading has not been my first choice for passing the time.  Annoying!!

Today is the first day I have not been sneezing, nose running and eyes watering continually, altho still coughing, but feeling like the rise back to health may be coming, albeit slower than I had hoped for. Today is my sweetie's birthday, and unfortunately I don't think I better visit, wouldn't want to bring this awful cold/flu to the residents.  Maybe tomorrow or the next day.

I have mentioned in previous posts that living alone is sometimes a good thing, but being sick and living alone is definitely not a good thing. There is no-one to bring you a tray with a bowl of chicken-noodle soup when you are feeling hungry, no one to check on you to see if there is anything you need, no one to go to the store to pick up more kleenex or cough medicine.

I think I am going to quit complaining now...who likes to read about other's complaints.  We all have our burdens to carry, some carry them with dignity and grace, while others moan and groan. I have found myself in the moan and groan category this last week with little dignity and absolutely no grace with an added dose of self-pity along the way.

"Be careful about reading health books.  You may die of a misprint."  ~Mark Twain