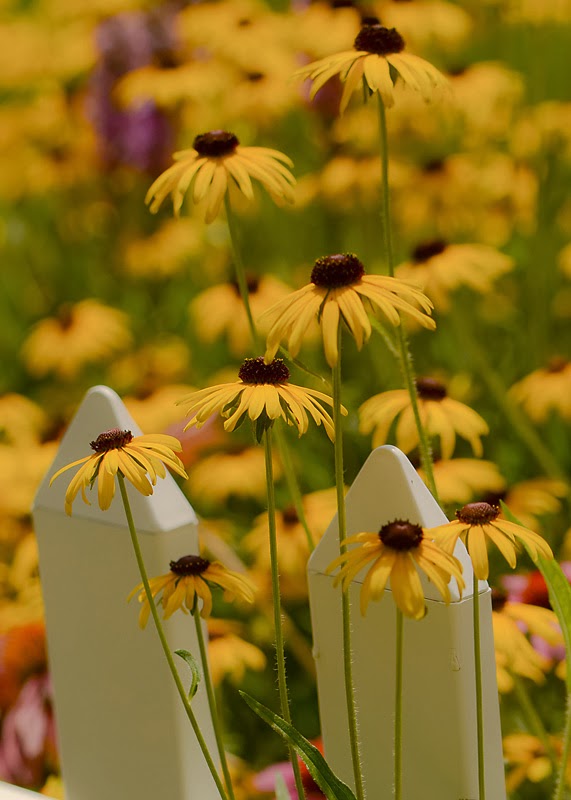 Ha fooled ya....probably not.  But as I was strolling thru some of this past summer's images, found this one and figured some of you out there in deep winterland would appreciate some summer-time color. It will return, I promise eventho some of us are buried and shivering and apparently bored as to be looking at last summer's images.  Last year I was begging for snow, now not so much....I think I am feeling a little trapped....what is wrong with me....never, never satisfied.  Because of our very frigid temps many roads are still a little icey-dicey and the piles are getting higher each day.  In fact it is snowing right now as I look out the window.   Not much, and tomorrow's forecast is for rain.  ay yi yi where is all this moisture going to go?  Icicles are starting their dreaded formations...these are mine at the backside of the house. 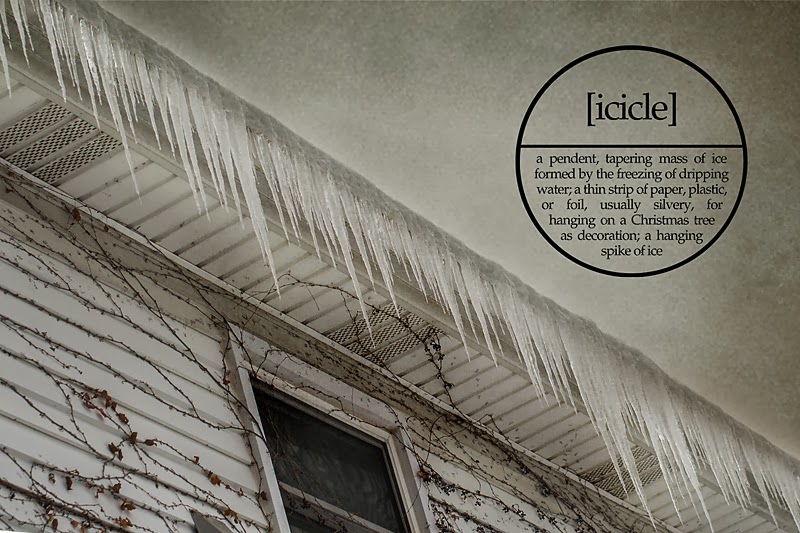 Hmmm, I have read several blogs about troubles with blogger.  I was feeling so smug that I had not experienced any of their issues and just as I was writing this, a message popped up saying that I had unlogged from a site, did I want to re-log back in and then wham, half of my post was gone.  Maybe it was reading my "bitching" words and decided to stop me in my tracks.

I was complaining about the depth of the snow and how my "weak" ankles are not the least bit sturdy manipulating thru the heights and worrying about dropping my camera when blogger decided to delete that portion of my post.  Hmmm

What's with the starlings sticking around this winter??  Yesterday I saw them hanging around a restaurant's garbage bins and today this in my backyard....and no, I do not have garbage in my backyard. 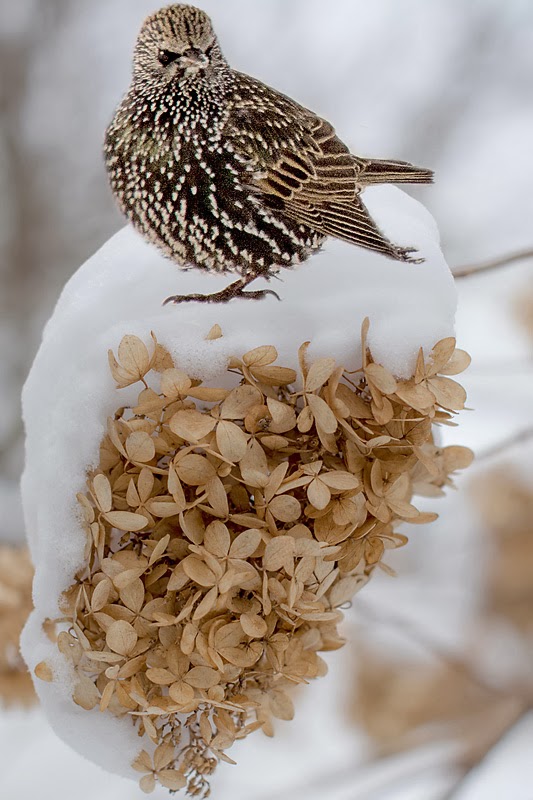 I am trying to capture more compelling images since that is my "word" for the year.  The only thing I find compelling in this is the need to hire someone to remove all of this "ivy" that is growing on the west and north sides of my house.  I planted the green ivy....the brown came from my next door neighbor.  Don't know if it was planted or drifted in from parts unknown, but it is extremely aggressive and probably is doing some damage to the siding of my house. 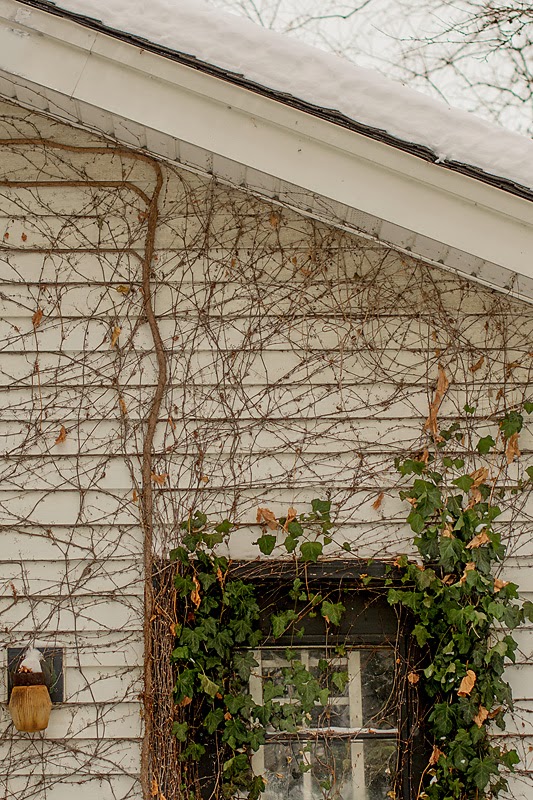 I have 3 huge things on my "to-do" list and I keep putting them off, keep putting them on the back-burner, keep doing everything but what I should be doing.  That is probably why I am in a cranky mood. And I know the answer is to get busy and get them done, complete and finished.  But first.... 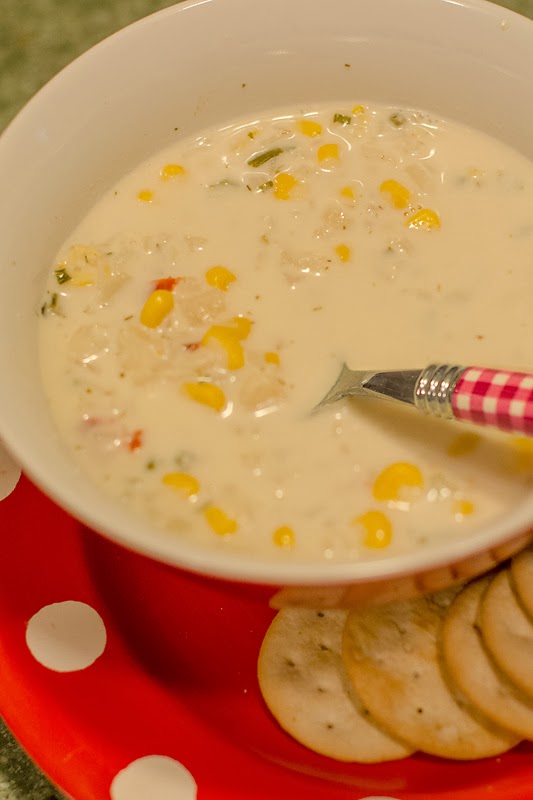 lunch.  My daughter gave me some soup mixes for Christmas.  Frankly I thought it was a brilliant idea since she knows I don't do much cookin' anymore and these soups are simply delicious.  The one pictured above is called "Florida Sunshine Red Pepper Corn Chowder" from Frontier Soups.com.  I first discovered Frontier Soups several years ago at a craft show.  It was one of the "classiests" craft shows I ever attended.  I won't go into detail because it "unfortunately" no long exists, but that was my first introduction to these soups.  They were made by a woman from Waukegan, IL, a neighbor so to speak, who loved cooking.  Her friends and family urged her to go "into business" because they were so delicious which led her to "Frontier Soups".  A dry mix with you adding the fresh ingredients.  They are healthy, no salt added, gluten free and mighty tasty!!  She has a bounty of choices.   If you go to the website there are a variety of soups, appetizers, bread mixes and apparently she has expanded all over the United States.  Wow, just from her kitchen to the world, love it!!  If you can't find a store near you, order from the website, they ship!!

So I better stop and get busy with one of those HUGE items on my list.  If I don't I'll stay grumpy and I don't like grumpy.

"Motivation is what gets you started. Habit is what keeps you going."  ~  John Rohn