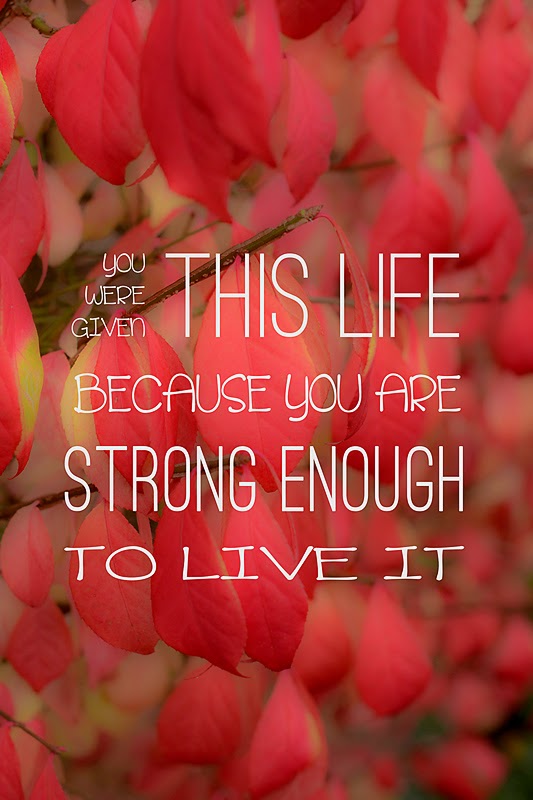 My Mom passed away 3 years ago this month.  As like many of you who have lost their Mothers, I miss her every single solitary day.  As I write this tears are forming and soon they will be running down my cheeks, blurring my vision.  But my vision of my Mom remains clear, she was one strong cookie.  The above quote describes her perfectly.  She was a single Mother, divorced with a small child in the early 1940's, not an easy time to be a single Mom.  My "father" decided when he returned from the war he did not want to be married any longer, leaving my Mother and me to make our own way in the world without him.  I don't know why I included myself in that last statement, I was a mere child, a toddler when my father left us.  My Mother was the one that made "our" way in this world, certainly not me. Probably in somewhat of a disgrace my Mother left her home in Kansas and moved to Amarillo, TX where her older sister now lived.  Mom and I had a small apartment, one bedroom as I faintly remember, she worked full time and I stayed in a nursery all day.  Without a car, Mom and I would ride a bus to the nursery, then she would continue on to work, only to repeat, in reverse, again in the evening, 5 days a week. It wasn't until I was 4 years old that Mom met and eventually married the only man I ever knew as a father.

They lived a happy life, married for over 50 years until my "father" (he did officially adopt me) died of heart failure in June, 2001, leaving my Mother alone again.  Only this time there was no baby to worry about, but by this time Mom was in her 80's.   She continued to live in her home, kept busy with her friends, still drove, until she fell ill with pneumonia when she was 89.  At this time Mom lived in McAllen, TX, way down in the "valley", not an easy place to travel to if you are in a hurry.  No direct flights, always changing planes in either Dallas or Houston so when she fell ill my brother and I decided that perhaps she should live closer to one of us.  He lived in Houston at the time so she began looking at "assisted living" places in Houston.

After she was released from the hospital and then rehab I asked her to come stay with us for the summer, time for her to completely recover.  But as time moved forward it became obvious that she should not live on her own any longer.  Eventho she had recovered from the pneumonia it had taken a toll on her body, she never regained the strength she had prior to her illness.  At that same time, my sweetie began to really decline from Alzheimer's. Mom would stay with him while I ran errands, and when I was able to join friends for an occasional evening out, Mom would prepare dinner and stay with my sweetie, entertaining him until I returned home.  She was my rock when "things" started to really get bad.  She and I spent many hours playing Scrabble or Yahtzee or Gin Rummy, entertaining both of us.  Every evening at 5:00 PM we would have our glass of wine together.  Without her for conversation I think I would have gone stir crazy.  My sweetie had by this time really lost his ability to carry on any kind of conversation.

After 6 months of staying with us, she made the decision to sell her home and move in permanently. She lived with us for about 2 1/2 years prior to her death and most of that time she was in fairly good health.  She had congestive heart problems which she battled with many trips to the heart hospital for treatments and an occasional stay, but she loved to shop, go out to eat & have her glass of wine each evening.

I had moved away from my parents as soon as I married, only seeing them about once a year sometimes twice, so being with my Mom again after all those years of being apart was a blessing I will always treasure.  I grew to know the woman, and what a strong woman she was and for that I am grateful.