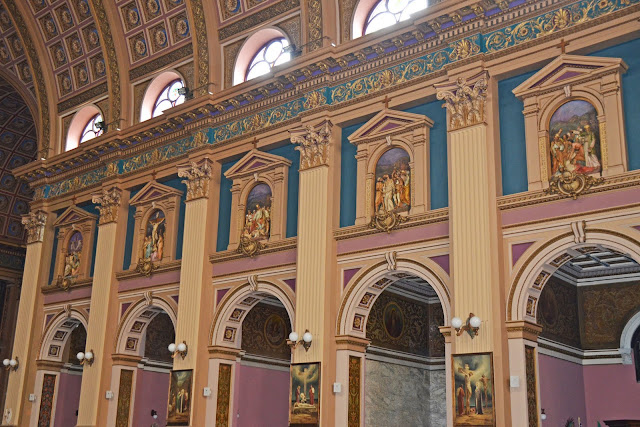 Yesterday, Catherine and Georgia joined me on a what I had hoped to be a Friday Foto Fun Day....we were off to see the Jellies at the Shedd Aquarium, but first Catherine suggested we stop at Our Lady of Sorrows Basilica on W. Jackson in Chicago....really right on the way to the aquarium.    The church was locked but after trying several doors finally a nice woman, one of the employees, answered our knocks and let us in.  She explained that because of the rather unsavory neighborhood, they felt it safer to keep it locked.  It is a sad state when church's must be locked to protect them from the neighborhood.  I thought church's were a protector of man, not from man.  As we entered this massive church it was evident that this was a holy place.  A Basilica is an honorary title which the Pope gives to a church because 1) of it's artistic value (that was quite evident) and 2) It was the center of devotion.  The Sorrowful Mother Novena began here in 1937 and at it's peak in the late 1930's there were 38 services here every Friday attended by 70,000 people.  Today, there are only 300 families that attend this church.  ﻿ 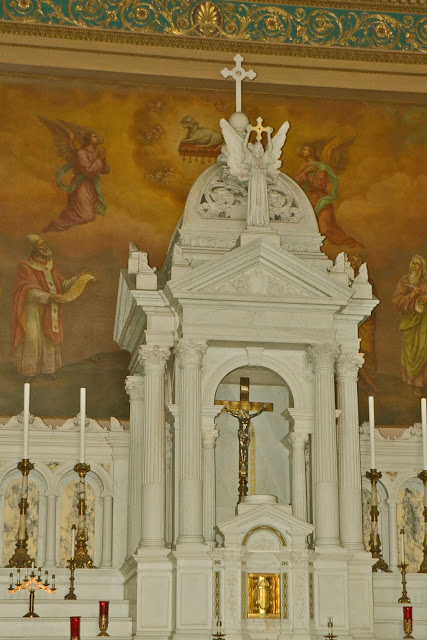 The high altar is built of entirely white carrara marble﻿ 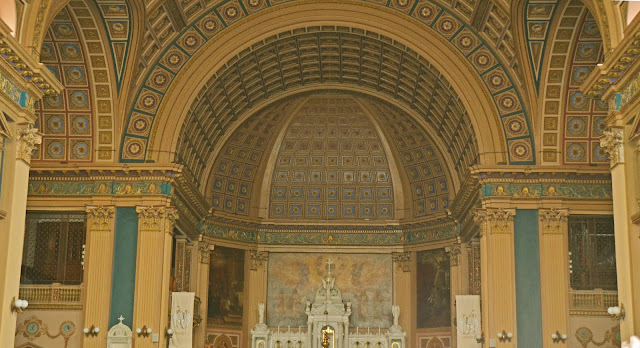 These images are a little dark, it was a very cloudy day and there were no lights on inside the church, so it was really difficult to capture the true beauty and colors of this magnificent church. 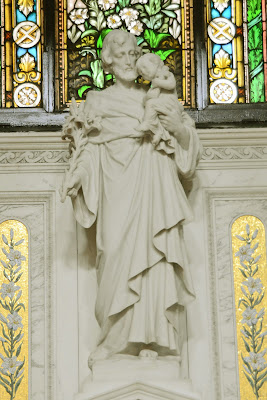 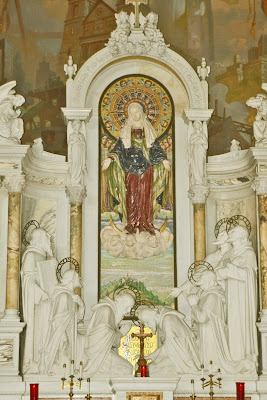 In each of the alcoves there are wonderful statues each representing the history of "the church". 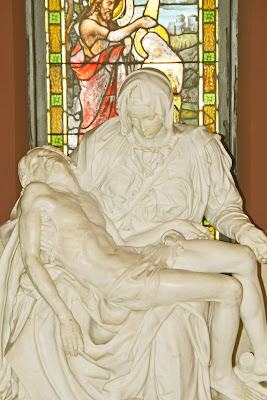 In a separate room, the old Baptistry, sits a replica of Michaelangelo's pieta.  It was carved in Italy and brought and displayed in Chicago's Loop before being installed in the church in 1937.   It weighs 3 tons so not an easy task to move this from place to place. 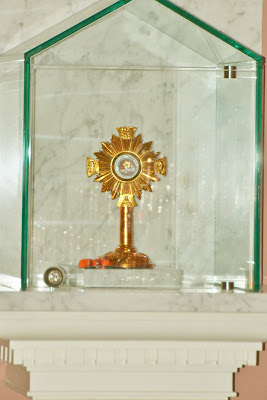 This is a national shrine of St. Peregrine, located on the east side of the Basilica, and dedicated by Joseph Cardinal Bernadin on June 7, 1993.  St. Peregrine (1265-1345) was a Servite Friar who was miraculously cured of cancer after praying all night before a crucifix.  Today he is considered the patron saint of Cancer and those critically ill.  Many a prayer has been offered to this Saint and continue daily in hopes of ending the deadly disease. 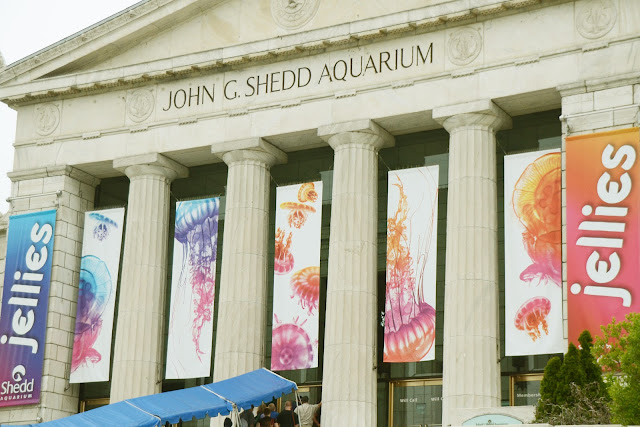 ﻿
With Georgia's assistance, we drove straight to the Shedd Aquarium and instead of paying $16 to park we got lucky and found a meter spot less than a block away.  Ofcourse it ate quarters like Toby eats when he is ravished (which is most of the time).  I think 1 quarter was 10 minutes and we wanted at least 2 1/2 hours worth, you do the math, it was alot.  It was still cheaper than $16.  As we walked closer and closer the number of people around the museum  kept growing and by the time we reached the entrance the line was forever and ever.  My heart sank because I knew there was no way we could stand in that line and be able to enjoy the jellies in the time we had alotted ourselves.  So, this was as close to the jellies as we got on Friday.  I think the exhibit will be here until early 2012, so hopefully in the not too distant future, I'll be back.  ﻿ 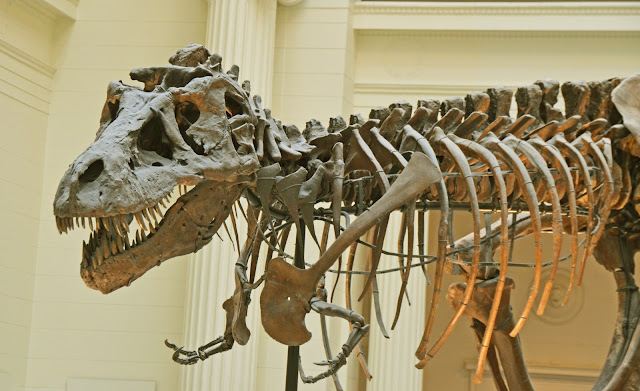 Since we couldn't get into the Aquarium we decided to stop in at the Field Museum which is right next door.  There are 3 Museums (the Aquarium, the Field Museum and the Adler Planeterium) and Soldier Field all within short walking distances of each other.  Each one is spectacular.  The large main hall at the Field Museum is the home to Sue, the largest, most complete T.REX ever discovered.  Whew, glad the only thing that vaguely resembles a dinosaur today is the rather small in comparison Iguana.  I can still remember the first time I saw Jurassic Park and almost peeing in my pants when the 2 kids were trapped in the kitchen and the raptors were after them....omg!!! 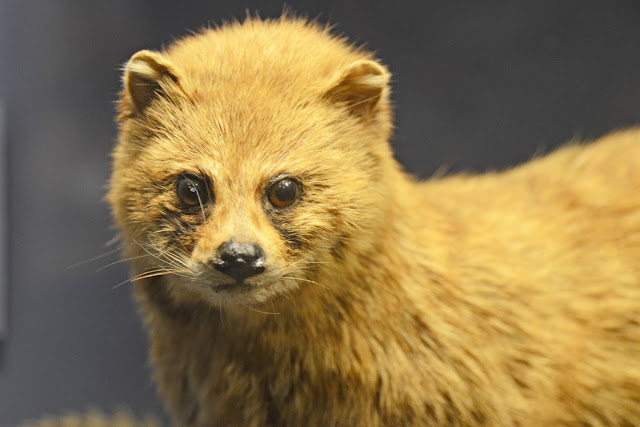 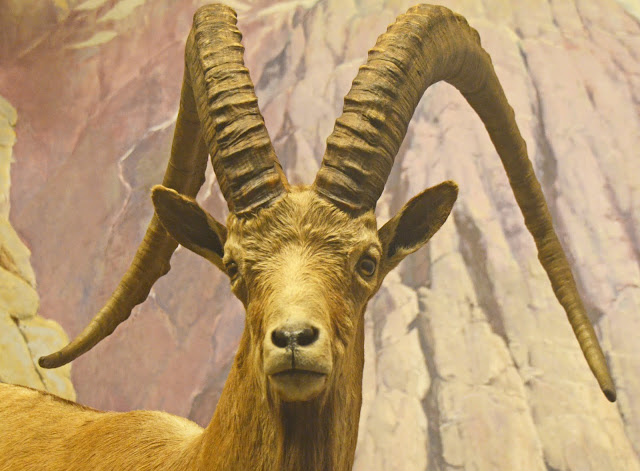 We wandered around and took a few pictures, it was dark inside and a flash would not work with all the glass.  The displays are first class and the animals did look quite real (well I know they were real and alive at one point but now they are dead and stuffed). 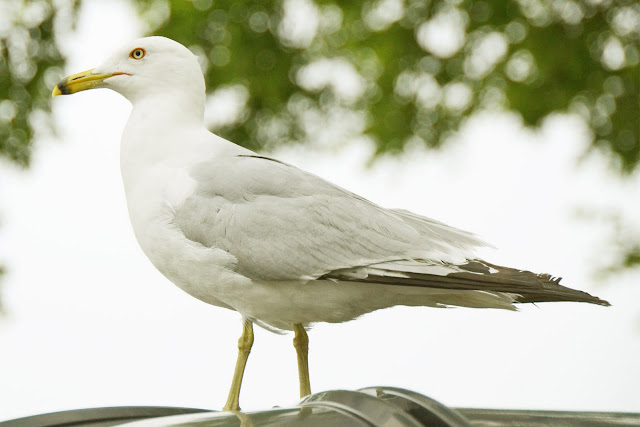 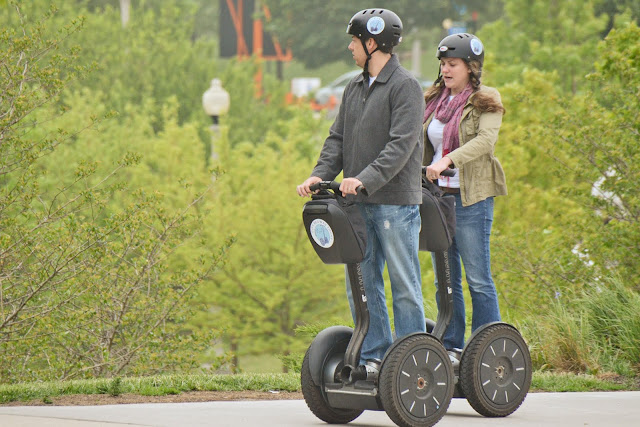 Now this looked like a good time, there were quite a few of these buzzing around the museum area.  It would be my luck that it would flip if I tried one of these.  Didn't the inventor of the segway die in an accident while riding one???  I think he drove it off of a cliff.  If the inventor couldn't tame it, how would I ever dream of handling one?  Ofcourse there are no cliffs close, but there is this lake called Michigan that might be a problem.  She looks awfully close to the fella in front of her, hopefully their wheels don't get tangled up. 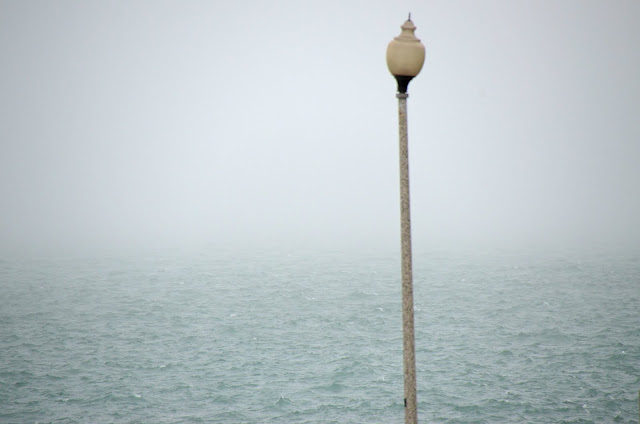 And speaking of Lake Michigan, this is the view as we walked back to the car....fog had rolled in so no pictures of the Chicago skyline today.

Not exactly the day I had planned, but a good one afterall.

“If you don't think every day is a good day, just try missing one.”  Cavett Roberts