Today we celebrate the birthday of one of our greatest American humorist's, Erma Louise Bombeck, born in 1927.  Erma was best known for her newspaper column, "At Wits End" that was syndicated across America and Canada in 900 newspapers, delivering laughter to the breakfast table three times a week .  Erma had a means of describing everyday life, children, housework, and husbands with an amazing sense of humor.  She spread her wit to television, appearing weekly on Good Morning America as her popularity continued to rise.   Erma found there was lots of money to be made making people laugh, she began her weekly columns at the Dayton Herald for $50 a week and at her peak was laughing her way to the bank making over a million a year.  Unfortunately Erma died after receiving a kidney transplant due to polycystic kidney disease, a congenital defect on April 22, 1996 at the age of 69.  Too young, and too many more columns to write.  If she were alive today I am sure we would be reading her hilarious comments about cell phones, texting and the latest fashion craze, skinny jeans.   Here are just a few of my favorite's from Erma:

In honor of Erma, here is a small bowl of cherries, not full, ripe, juicy cherries (not in season yet) but a bowl of cherry jam with whole cherries....Happy Birthday, Erma!! 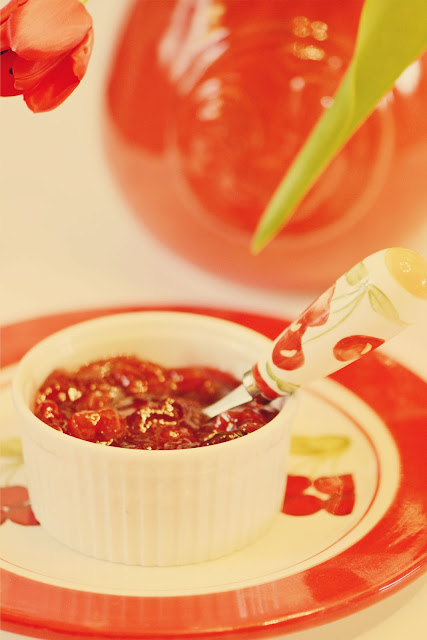 Please visit me tomorrow, Wednesday, at our collaborative blog, Focusing on Life where I will be musing on ??